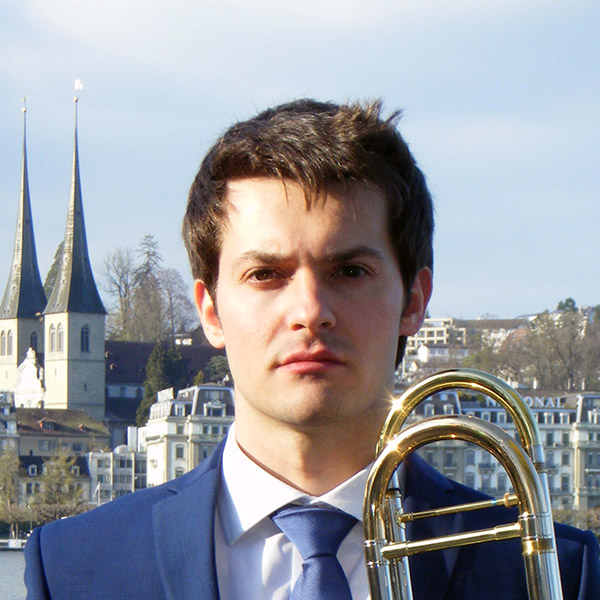 From 2014 trombonist of the Lucerne Symphony Orchestra (Luzerner Sinfonieorchester), Switzerland. In the same year, under the guidance of Ian Bousﬁeld, he obtained the title of Master in Music Performance at the Hochschule der Künste Bern (Bern, Switzerland), spending a semester in Germany as an Erasmus student at the Hochschule für Musik Theater und Medien in Hanover (Prof. Jonas Bylund).
In 2012 he obtained the 2nd Level Academic Diploma at the Istituto Superiore di Studi Musicali della Valle d’Aosta (prof. Vincent Lepape and Stefano Viola) with grade 110/110 cum laude et mentione; at the ISSM G. Donizetti of Bergamo he graduated in 2008 (prof. Ermes Giussani).
From 2010 to 2012 he was a member of the Orchester Akademie Ossiach, Austria, while his professional activity sees him performing with the most important Italian ensembles (Teatro alla Scala in Milan, Orchestra dell’Accademia Nazionale di Santa Cecilia in Rome, Orchestra Mozart Bologna, Teatro Regio Torino, Teatro la Fenice in Venice, Teatro Carlo Felice in Genoa, Orchestra Haydn in Bolzano and Trento, Arena di Verona, Teatro Petruzzelli in Bari).
In 2006 he won the “Lino Barbisotti” scholarship, as well as the scholarship of the Rotary Club of Bergamo, in the same year. As a teacher, in 2015 he held a three-day course at the ISSM of Valle d’Aosta, at the invitation of Prof. Stefano Viola.