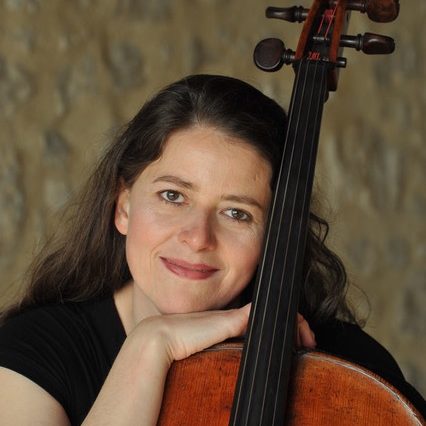 SOLD OUT!
AUDITORS ONLY

The cellist Ulrike Hofmann completed her musical studies at the Berlin School of Music with Prof. Markus Nyikos, obtaining a soloist diploma with a mention of merit. As a member of the Karajan Academy she began collaborating with the Berliner Philarmoniker Orchestra. Winner of the competition “Deutsche Musikwettbeverb”, she was selected to participate in the “Konzerte Junger Künstler”, thanks to which she began her solo career. She was subsequently awarded at the international competitions in Marktneukirchen, “Domenico Gabrielli” in Berlin and “Domnick Violoncello Preis” in Stuttgart. She is currently a member of the Stuttgart Radio Symphony Orchestra and regularly collaborates with the “Chamber Orchester of Europe” and the Berlin Ensemble Oriol. Since 2000 she has been a member of the quartet “Le Musiche” in Berlin with which she has carried out intense concert activity, radio and record productions and masterclasses.As a soloist and chamber musician she gives concerts in Europe, Japan, the United States, the Middle East and participates in important music festivals such as the Rheingau Festival, the Mitteleuropa Festival and the Salzburg Easter Festival. As part of the courses of the Carl-Flesch-Akademie in Baden-Baden, she was awarded the Lions-preis, thanks to which she recorded her first CD for cello and orchestra with music by Dvorak and M. Bruch.