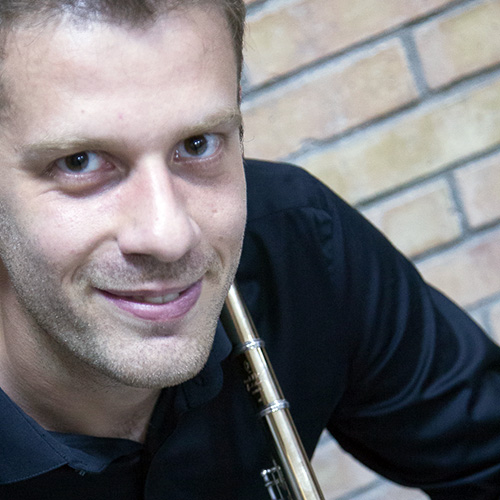 He was born in 1985 and began studying the transverse flute at the age of 13 with Maestro Filippo Cianfoni. He graduated from the Conservatory L. Refice in Frosinone at the age of 17 with honors. He attends the high specialization course at the Conservatory of Santa Cecilia under the guidance of Carlo Tamponi and in the meantime he also follows the course with Maestro Glauco Cambursano at the Accademia di alto perfezionamento in Imola, obtaining in both cases the master diploma.
He is the winner of numerous national and international competitions such as Leonardo de Lorenzo, Severino Gazzelloni, Krakamp, Syrinx, Palmi, Ovada, Spoltore and Verdi Note. In Nice he won the Second Prize and the Special Prize for the best performance of Jean Francaix’s “Divertimento” at the International Competition “Maxence Larrieu”. Afterwards he performed in Monte Carlo, Nice and Geneva as soloist and in duo with Larrieu, also live on radio. He won the First Prize at the International Competition “Biwako” in Japan, the First Prize at the International Competition “Timisoara” in Romania and the Special Mention at the International Competition “Jean-Pierre Rampal” in Paris. He has given numerous solo recitals, and is regularly invited to national and international festivals and flute shows in those he gives masterclasses and concerts. In 2008 he began his collaboration with the orchestra of the Maggio Musicale Fiorentino as First Flute until the end of 2010, when he won the competition chosen by Maestro Zubin Mehta. Also in 2010 he won the competition as First Flute at the Teatro dell’Opera in Rome, chosen by Maestro Riccardo Muti. With both orchestras participates in numerous tours in Slovenia, Spain, Turkey, Russia, Romania, Japan. In the same years he has collaborated, and still collaborates as Primo Flauto, with the Accademia di Santa Cecilia, Teatro alla Scala, Filarmonica della Scala, Comunale di Bologna.