Aims of the course

Dedicated to all musicians who want to learn the first notions of conducting technique: band teachers, teachers in middle school courses in music and non-music, instrumentalists who want to expand their pool of knowledge, teachers who in various capacities manage activities that require the management of musical groups.

The Course was born from the request of many musicians to find a moment of confrontation on the “Basic Direction Technique”, being all engaged in activities that require such skills: for example the management of band groups and Music Schools in the area, the preparation of ensembles in Middle Music Schools, Music High Schools and Music Schools in general and all those activities that require the management of musical groups.
At the same time, the skills learned in this course, expand the ability to fully analyze a score and precisely define the problems related to the management of ensemble music. There is also a hint of instrumentation, with specific exercises dedicated to solving problems related to the arrangement of the starting score in organic relationship in use.
The subject of the Course, just as it has been conceived, is dedicated to musicians of all levels, being the Direction a content of general utility and musical growth.

• Position and balance of the body, relaxation exercises
• Movement: counteract the natural circular motion of the arms
• Splitting of the gesture: preparation, impulse (stroke), rebound
• Hand, wrist, forearm and arm in relation to dynamics
• Work plan (below us and all strokes must be on the same spot)
• Direction planes (belly, shoulders, eyes depending on who is to be directed)
• Movements on the podium
• The wand: use, grip, movements
• Times in 2, 3, 4
• Initial attack on all times in beat and preparatory gesture
• Bonded, detached and neutral styles Times in 5, 6, 7
• Subdivided times (danger of subdivision)
• Initial Attack: in beat, in lift, in any stroke
• Times in 1 rails and ternaries
• Left hand development: exercises for independence
• Attacks (entry) in beat and in raise with the left hand
• Sound support
• The crown and its treatment as appropriate
• Instrumentation: study and elaboration of some chorales by J. S. Bach
• Possibility to conduct the Wind Orchestra of the Festival.

He graduated in Clarinet with full marks under the guidance of Prof. G. Di Carlo, later perfecting his skills with famous teachers such as K. Leister, V. Mariozzi and C. Scarponi.
From 1990 to 2003 he played permanently with the “Orchestra Sinfonica Abruzzese” collaborating with prestigious musicians and for the most important Italian Musical Institutions; with this prestigious Orchestra he has performed concerts abroad (France 1996 with A. Bernard, Spain 1997, Andorra 2000 with the famous singer B. Hendricks under the baton of F. Yepes, France 2001 with P. Amoyal), in Italy (Milano sala Verdi for the “Serate Musicali” years 1999, 2000 and 2001, Rome Easter festival, concert seasons in Foggia, Pompeii, Naples, Perugia, Brescia, etc.). ), recordings for RAI (Roma Teatro Sistina with M. Freccia, contemporary music festival of the Aquarium, Caracciolo prize, etc.), recordings of compact-disc (BGM, EDIPAM, ARTS) and collaborations with soloists such as B. Petrushansky, M. Conti, V. Mariozzi, U. Ughi, E. Dindo, V. Ashkenazy, A. Bernard, M. Campanella, Milva, A. Stewart, etc..
Since 2000 he has dedicated himself to the Direction of Wind Orchestras studying with Lorenzo Della Fonte and following courses with Jan Van der Roost, Jacob De Hann, Frank Battisti and Eugene Migliaro Corporon; he has collaborated with orchestras such as Festival Junior Brass Band of Aosta (Aosta 2001), Wind Orchestra of Valtellina (Spain 2002), Philharmonic Orchestra “Leopolda” of Florence (Parco della Musica Roma, Teatro Comunale Firenze, Montenegro 2005 France 2006), Wind Orchestra “Città di Procida” NA (Spain 2005), Wind Orchestra of the Festival “Officina dell’Arte” of Acquaviva Picena AP (Professional Training Course 2005, 2006).
He was invited as guest conductor by: Orch. Philharmonic “Leopolda” of Florence, Wind Orch. “Città di Procida”, Wind Orch. “Karl Orff” of Priolo Gargallo in Sicily, Wind Orch. “Laboratorio Ensemble” (AP), “Consonanza Musicale” of Lissone (MI), Philharmonic “Leonardo da Vinci” (FI), Orch. of Winds of the Istituto Superiore di Studi Musicali “G. Braga” of Teramo, Corpo Musicale “P. Giannone” of Ischitella (FG), Corpo Bandistico “Città di Fermo”, Banda “Città di Mantova”.
In November 2009 he was invited as guest conductor to conduct a series of concerts for the “Banda Simfonica del Centre Artistic Musical de Moncada” – Valencia (Spain); in program music by Spanish composers and the first Spanish performance of Un amore a distanza… focal produced by the Musical Association “Accademia”.
Since 2018 he is a member of the USA WIND BAND, an American association created to invite European musicians, with whom he shares an intense musical programming and is regularly invited to conduct at the Universities of Chicago, Boston, Philadelphia, etc.. In 2019 he was invited as guest conductor for the Wind Band of the Carrol University of Chicago and for the Wind Orchestra of the Conservatory of Moncada, Valencia-Spain.
He founded and conducts the Wind Orchestra “U. Giordano” of the Conservatory of Music of Rhodes Garganico section detached from Foggia, with which, in addition to numerous concerts, he has addressed much of the panorama of original compositions and numerous first performances dedicated to the Orchestra.
Artistic Director of the Associazione Culturale Musicale ACCADEMIA 2008, he founded and conducts the Italian Wind Orchestra “ACCADEMIA”, and is permanent director of the sax ensemble “SAXOFONIA” with which, in addition to an intense concert activity, he recorded the CD Polvere di Stelle, which received unanimous acclaim from the public and critics.
He is guest conductor and first clarinet of the Wind Orchestra ARMELIS of Collarmele (AQ), which, in addition to its numerous concert activities, annually hosts guest conductors of the calibre of F. Creux, L. Pusceddu, Thomas Fraschillo and David Waybright.
He was called as a jury member of the competition of Bands of the province of Teramo years 2007/2008 and the International Festival of Musical Bands of Giulianova (TE) years 2010/2011.
In July 2009 he was a member of the commission of the “1st International Wind Conducting Competition “P. Giannetti” in Abbadia San Salvatore (SI) with J. Pascual Vilaplana, L. Della Fonte, M. Billi, D. Bostok.
Coordinator of the RODI JAZZ FEST (see website www.conservatoriofoggia.it), where in addition to conducting the Festival Orchestra he has collaborated with jazz musicians such as Fabrizio Bosso, Maurizio Giammarco, Bruno Tommaso, Jamal Ouassini, etc..
Since 2003 he has been teacher and first clarinet of the “Giovanile Orchestra di Fiati” of Ripatransone (AP), made up of instrumentalists coming from Italy and abroad, Director Lorenzo della Fonte, with whom he has deepened the vast original repertoire for Wind instruments, performing and recording numerous first performances.
In 2009 he began an artistic collaboration as conductor, with Mediaset/Medusa R.T.I. and RAI for the recording of Film and Fiction soundtracks. Among the most important: Sorry, but I want to marry you by F. Moccia; Tutto l’amore del mondo by R. Grandi; Il ritmo della vita with the cast of “Ballando sotto le Stelle”; Tutti per bruno with C. Amendola; La Certosa di Parma by C. TH Torrini; Le tre rose di Eva by C. TH Torrini.
Winner of the competitions for the roles in the Conservatories of Music for the subjects “Chamber Music” and “Musica d’Insieme per Fiati” currently teaches “Musica d’Insieme per Fiati” at the Conservatory of Music “U. Giordano” of Rodi Garganico, detached section of Foggia.
In 2006 he graduated with full marks in Musical Disciplines at the Musical Institute “G. Braga” of Teramo. 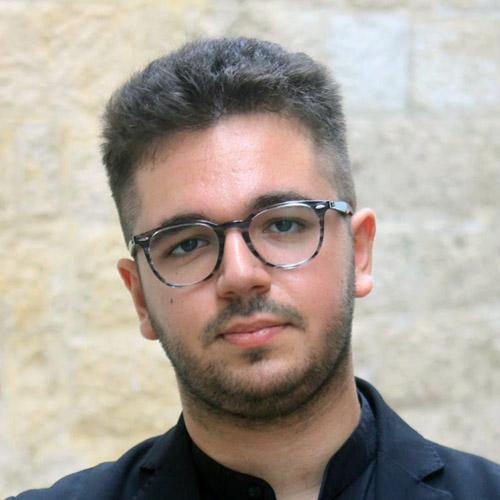 He started studying the transverse flute with Maestro Mario Manicone. In 2008 he enrolled at the Conservatory “U.Giordano” (seat of Rodi Garganico), initially studying with M° Giancarlo d’Abate and later with M° Francesco Petrelli. Winner of numerous competitions including that of Capitanata, Garganum of Rodi Garganico, “Civitas” of San Paolo Civitate , “Mirabello in musica” of Mirabello Sannitico and 2nd prize at the “Città di Penne” Competition, in 2016 he graduated in flute at the Conservatory “U.Giordano” with full marks and in 2018 he obtained a 2nd Level Degree in Flute with a mark of 110 cum laude. He has performed in various chamber ensembles at the Auditorium “Piergiorgio Frascati” in San Giovanni Rotondo, at the Music Festival “Diamo voce alla musica” in Rodi Garganico, in the artistic season “Musicalis Daunia” in Lucera, in the Cathedral of Foggia, as part of the project “VociXVico”, in the Cathedral of Cerignola, in the concert hall “R. Auciello” in Ordona and as soloist with the Symphony Orchestra of the Conservatory of Rhodes Garganico under the direction of M°Paolo J. Carbone. From 2011 to 2015 he took part in masterclasses at the Giovanile Orchestra di Fiati di Ripatransone, performing as first flute and piccolo. Since 2019 he has been a member of the flute ensemble “Flauto&Variazioni” of Ferrara for which he is also arranger. He is founder of the “Trio Schulhoff”, with whom he has performed in various festivals in the Gargano and with whom he premiered the “Three miniatures for flute, viola and double bass”, specially composed by Maestro Stefano Taglietti and published for Rai Com. He perfected over the years with M° Filippo Mazzoli, Aldo Baerten, Andrea Manco, Paolo Taballione, Marianne Gedigian, Dante Milozzi, Magali Mosnier, Matteo Evangelisti and participated in chamber music masterclasses with masters Andres Diaz, Kathrine Ten Hagen, Sarunas Jankauskas and Giovanni Battista Rigon. For the 2019/2020 season he plays the role of second flute at the Orchestra Sinfonica Abruzzese, playing under the conductors Giampaolo Pretto, Nicola Paszkowski, Carlo Goldstein and Benedetto Montebello. At the same time, he also took up a course of conducting for wind orchestra initially under the guidance of M° Giovanni Ieie, then studying at the D.A.S. Academy of Fermo with M° Mirco Barani and conducting at the end of the final masterclass under M° Frank Ticheli. Since 2014 he conducts several bands of the Gargano panorama, including the Band Complex “A.F. Nardini” of Vico Del Gargano and the Band Complex “Azzurra” of Ischitella, always bringing innovation from the point of view of repertoire and professional approach to the performance and management of the group. It is perfected with M° Lorenzo Della Fonte, Fulvio Creux, Mirco Barani, Ildefonso Martos Carretero, Filippo Ledda, Arturo Andreoli and Wesley Broadnax.

Apply to the Masterclass