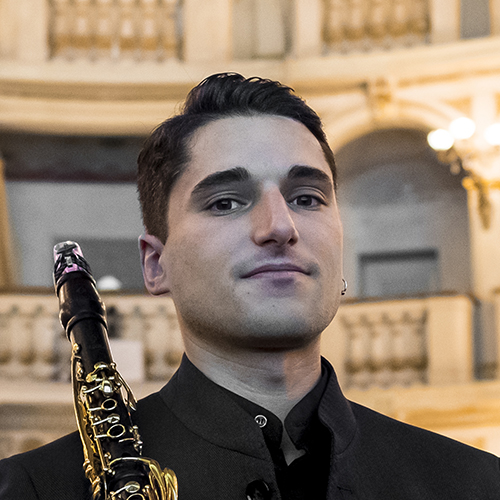 SOLD OUT!
AUDITORS ONLY

First Clarinet at the Orchestra of the Teatro Comunale di Bologna and the Bologna Philharmonic since 2015, he has collaborated with the Orchestra of the Teatro La Fenice di Venezia, the Orchestra della Svizzera Italiana, the Orchestra del Teatro dell’Opera di Roma, the Orchestra del Teatro alla Scala di Milano, the Filarmonica Arturo Toscanini, the Orchestra del Teatro San Carlo di Napoli, I Pomeriggi Musicali, the Orchestra del Teatro Regio di Parma. In July 2014 he was chosen by Maestro Riccardo Muti as First Clarinet of the Orchestra Giovanile Luigi Cherubini.As a soloist he performed with the Filarmonica Arturo Toscanini, I Musici di Parma, the Orchestra of the Teatro di Busseto. He dedicates himself with particular passion to chamber music, performing in duo with his brother Federico the main pieces of the repertoire for clarinet and piano, in many festivals in Italy and abroad. In 2014 he founded the Falstaff Quartet, winning 1st Prize at the Severino Gazzelloni Flute Competition (Cat. Musica da Camera) and is a member of the Nonetto a Fiati of the Teatro Comunale di Bologna. He has obtained, as soloist, numerous awards in national and international competitions. Born in Salerno in 1989, he graduated at the age of 16 under the guidance of Gaetano Russo and Sisto Lino D’Onofrio. Subsequently he perfected his skills with G. Riccucci and B. Canino in duo with his brother at the School of Fiesole, with L. Combs, E. Daniels, F. Meloni, R. Morales achieving the two-year course of Clarinet with honors and mention at the Istituto Musicale Vecchi – Tonelli of Modena with C. Giuffredi and the two-year course of Chamber Music in Parma with P. Maurizzi. Simone teaches clarinet at the Istituto Musicale Vecchi – Tonelli of Modena. He plays a Backun clarinet model Moba. He is also artist Légère Reeds and Silverstein Ligature.